Pinocchio, The Tale of a Puppet, Carlo Collodi 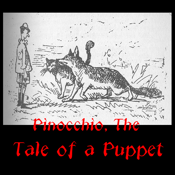 A wooden puppet full of tricks and mischief, with a talent for getting into and out of trouble, wants more than anything else to become a real boy. Pinocchio is a fictional character that first appeared in 1883, in The Adventures of Pinocchio by Carlo Collodi, and has since appeared in many adaptations of that story and others. Carved from a piece of pine by a woodcarver named Geppetto in a small Italian village, he was created as a wooden puppet, but dreamt of becoming a real boy. The name Pinocchio is a Tuscan word meaning "pine nut" . Pinocchio is known for having a long nose that becomes longer when he is under stress (first half-dozen chapters), especially while telling a lie.