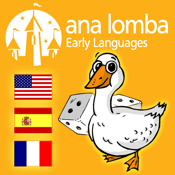 What better way to learn vocabulary in other languages than with a traditional children’s game, The Goose Game?

I grew up playing The Goose Game in Spain, my native country, and as I began to investigate it, I discovered that it is also played in several other European countries. Moreover, I even found a Goose Game board with tiny goose chips in Monticello, the home of the third U.S. president, Thomas Jefferson! Apparently, Jefferson was a big fan of the game, which he had discovered in one of his visits to England.

Some historians think that the game dates back to medieval times and that it has its origins in the famous pilgrim’s route “El Camino de Santiago,” hence the bridges, inns, and many dangers – which included the possibility of dying on the way! This origin would also explain the fact that the game is played in France, Germany and other countries with some variations.

My intention for my version of The Goose Game is that you and your child learn vocabulary for the story of The Ugly Duckling, which I am also developing as an application in multiple languages.

I think you'll agree with me that it is time to change the way in which foreign languages are taught in early childhood. My intent is to do so one child and one parent at a time.

I hope that you like The Goose Game and the titles in the series of classic tales.