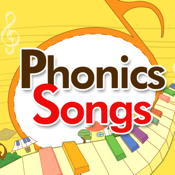 ★ Learning the English alphabet and basic English words naturally by listening to English children's songs!
★ A special introductory price of just $2.99 on a first-come basis! (There will be increase in price up to $4.99.)

-The innovative English learning program for little children who are at first learning English!!

-There are famous songs sung by children throughout the world including new lyrics with combinations of the sounds of English letters, so children can listen and learn new words. Those songs lead children to practise the English alphabet naturally in pronunciation.

-You'll see your children pronounce and speak English words as well as the English alphabet one by one while just listening and singing along the English children's songs.

-Plus which, children get tuned to English through listening and repeating the voice actors singing songs with correct pronunciation.

■ The most fun and effective way to learn the English alphabet and basic English words!
Children learn a language by themselves listening to stories and singing songs. It's important for the children who are the first time English learners to have enough listening practice before they get started reading and writing.
『Phonics English Children's Songs』enables children to learn English alphabet and basic English words effectively with fun just through listening to lively English songs over and over singing along.

■ Fascinating APP for fun and learning!
To take little children to English like a duck to water, first should make them get interested and amused in English. 『Phonics English Children's Songs』is composed with new lyrics to famous songs sung by children all over the word to lead children to learn English alphabet and basic words naturally. In addition, the illustrations in a high standard describing the words of each song in a fun way add interest.

★ONE
Listen to the songs and find out how each letter sounds.
Sing the songs and listen for the sounds in each word.
Repeat this process and you will see how easy it is to learn the words and the sound of each letter.

★TWO
Listen to the ‘short’ vowel songs and learn the sounds of each letter.
Listen and find out how a letter-group sounds, when the consonant comes before or after the short vowel.
To make it easier, only those short vowels have been chosen for practice.

★FOUR
Use the lettercardstoplayfungames.
Games were created using the words from the ‘application’ .
Touch the words on the picture and complete the words.