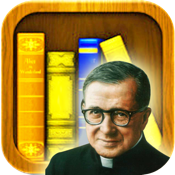 The Way
Read these counsels slowly. Pause to meditate on these thoughts. They are things that I whisper in your ear—confiding them—as a friend, as a brother, as a father. And they are being heard by God.”
Tags: The Way, books

Furrow
In a note to a 1950 edition of The Way, Saint Josemaría promised readers a new book —Furrow—soon to be published. The material was written and organized into chapter headings; only the numbering of the points of meditation and a stylistic revision remained
Tags: Virtues, Furrow

The Forge
This book, a compilation of spiritual annotations of Josemaría Escrivá appearing in 1987, completes the trilogy aimed at facilitating personal prayer that began with The Way and continued with Furrow
Tags: Contemplation, The Forge

Friends of God
A canticle to ordinary life, addressed to ordinary Christians, about the extraordinary surprise God has in store for them. This compilation was the first posthumous work of Saint Josemaría
Tags: Gospel, Prayer, Virtues, Friends of God

Christ Is Passing By
In 1973, Saint Josemaría prepared this book, drawing on his abundant preaching. It consists of 18 sermons preached between 1951 and 1971 that follow the feasts of the liturgical year, from Advent to the Solemnity of Christ the King
Tags: Christ Is Passing By

Holy Rosary
One December morning in 1931, Fr. Josemaría dashed off this small book in one sitting, just after celebrating Mass. He poured into these pages an example of his way of meditating the mysteries of the life of Jesus and Mary, and of reciting the Rosary. Parting with his reader, he confides, “My friend: I have told you just part of my secret. It is up to you, with God’s help, to discover the rest. Take courage. Be faithful. Become little (...) If you say the Rosary in this way, you will learn to pray well.”
Tags: Contemplation, books, Holy Rosary

Conversations with Josemaría Escrivá
In the years immediately after Vatican II, interviews with Saint Josemaría appeared in various newspapers and magazines around the world, such as Time, Le Figaro, and The New York Times. In them the founder broached a number of topics, including the mission of the university, the role of women in the church and in society, and the nature and apostolates of Opus Dei
Tags: Conversations with Josemaría Escrivá

***This applications “St. Josemaria”, “St. Josemaria for ipad” and “St Josemaria’s Books” are authorized by the Studium Foundation to have St. Josemaria’s Writings included on the iphone, itouch and ipad.
The Studium Foundation was established in Madrid on April 6, 2000. Its purpose is to promote "the publication and dissemination on a not-for-profit basis of literary works that contribute to the Christian and human education of persons, as well as to promote or participate in cultural activities that have the same character of formation or dissemination of human and spiritual values."