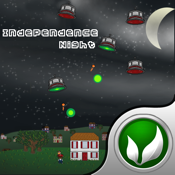 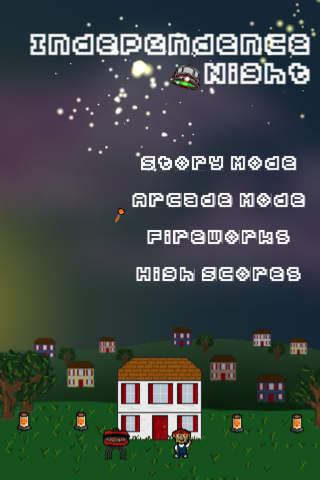 "The Best Game About A Boy Defending His Home From Aliens By Shooting Fireworks From His Backyard, On The iPhone, Ever!"

You're just a boy shooting fireworks in your back yard, until the Aliens decide to show up and ruin your barbecue! Using nothing but your trusty firework launchers it's up to you to defend your entire neighborhood against the alien invasion. Battle alien ships and deflect incoming meteors as your fight your way through the alien ranks and confront the Mothership itself. If no one else is going to save the world today, I guess you'll have to take the job!

- Battle through 9 levels in Story Mode as you fight your way to the final showdown with the Alien Mothership.
- Test your skills in Arcade Mode as wave after wave of alien invaders try to destroy your home.
- Firework Mode is where you can enjoy the sights and sounds of launching Fireworks without the hassle of those alien ships. (Great for Toddlers!)
- Retro Graphics and Sound
- OpenFeint and Game Center Leaderboards for HighScore tracking and competition with your friends!
- Unlock Achievements in both OpenFeint and Game Center!

F5 Games is a startup game developer based in Tulsa Oklahoma, and we're here to Rock Your Face Off!