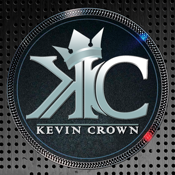 Born in Flatbush & raised in Brownsville, two cities in the heart & soul
of Brooklyn, New York’s burgeoning Caribbean community, DJ Kevin Crown aka
the “Natural Born Club Killa” channels his hood, his roots and his culture
with his powerful voice, swift moves and acute ambition. Kevin Crown’s
future as a DJ was realized at the age of eight when his father brought
home 2 records: Run DMC & Michael Jackson. From the moment he put the
vinyl on the turntables, he began his journey to becoming one of NYC’s
hottest DJ’s known for mixing Dancehall reggae with Hip Hop and R&B.

From making his own mixtapes at the age of 12 to DJ’ing on college radio
when he was only 16, Kevin Crown’s first love has always been music. In
late 2008, David “Squeeze” Annakie, CEO of LinkUp Media, asked Kevin to
play at a Rock with Squeeze event. After playing a short set during a
fashion segment, Squeeze was so impressed by Kevin’s unique sound that he
asked him to DJ at every Rock with Squeeze event and shortly thereafter
invited him to do his own set on LinkUp Radio. In addition, Kevin Crown is
also an accomplished dancer and famous for hosting the “How Fi Dance
Reggae” instructional DVD’s.

Kevin Crown recently released his 2-part mix CD entitled The Future. He
launched his website, kevincrownmusic.com, started his own iTunes channel,
DJ’s at several clubs each week and continues his radio show on LinkUp
Radio. As it he didn’t have enough on his plate, his schedule has him
traveling the world over to play special engagements in clubs, private
parties and corporate events.

Kevin Crown’s determination to excel in everything he does makes him a
force to be reckoned with in the music industry. His unique talent to
combine the musical styles of soul, Soca, reggae, alternative, hip hop,
dance and R&B always leaves the crowd hyped & wanting more, and guarantees
the name Kevin Crown will be known across the globe.