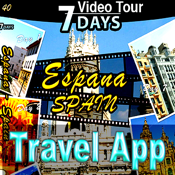 We begin our virtual journey in the Spanish province of Galicia. The Romans conquered Santiago de Compostela, a harbor city that has always been associated with the sea and since the Middle Ages it was, apart from Jerusalem and Rome, the most important pilgrimage destination in Christendom.

Some centuries ago, each of the large villages of the Rias Baixas prospered due to fishing, as did Pontevedra whose old town has been well-preserved with cobbled streets, intimate squares and the residential palaces of the city's former elite.

Vigo is reminiscent of Liverpool in the United Kingdom and is the largest city in Galicia. In 1529, the city began to trade with South America and this brought with it a new wave of prosperity. Then followed the Industrial Revolution which gave rise to a modern commercial city with a huge fishing industry.

Madrid is Europe’s most geographically elevated metropolis, a royal capital of history, outstanding buildings and cultural treasures. Madrid has a boulevard that has transformed it into a major metropolis, the Gran Via, which compares in both design and dimensions with the exquisite streets of Paris and New York.

Toledo is one of the oldest and proudest cities in Spain where, during Roman times, one of the greatest settlements was established, not surprising as it is located on a mighty rock foundation which served a useful purpose for its eventual defense.

Barcelona is one of the most lively harbor cities on the Mediterranean and, after Madrid, Spain’s second largest city and the capital of Catalonia. On the wide and shady boulevard of La Rambla that passes through the old town to the harbor, life goes on both day and night.

The Costa Del Sol is the name of the southern Mediterranean coast of Spain.

In former times, a variety of bumpy roads connected this region’s sandy bays and remote fishing villages where the Phoenicians and Romans settled long before the arrival of the Moors.

Malaga, Seville, Cordoba and finally Granada, the conclusion of our journey through a world of rocky coastlines and sandy beaches, magnificent cities and Moorish castles, an atmospheric land steeped in a wealth of history.