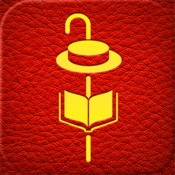 Inspired, in equal measures, by Hurricane Katrina, Buster Keaton, The Wizard of Oz, and a love for books, “Morris Lessmore” is a story of people who devote their lives to books and books who return the favor. Morris Lessmore is a poignant, humorous allegory about the curative powers of story. Using a variety of techniques (miniatures, computer animation, 2D animation) award winning author/ illustrator William Joyce and Co-director Brandon Oldenburg present a new narrative experience that harkens back to silent films and M-G-M Technicolor musicals. “Morris Lessmore” is old fashioned and cutting edge at the same time.

"...Morris Lessmore is the best. It is a visually stunning bit of work with entertaining interactive features. ...beautiful."
- Bob Tedeschi, NY Times

"A Game-Changing eBook App. Moonbot Studios [...] will have readers rethinking their engagement with the device as a storytelling machine. In a nutshell: gorgeous animation, inventive and playful interaction and quality content."
- Daniel Donahoo, WIRED.com

"The future of kid's eBooks"
- Rebecca J. Rosen, The Atlantic

"If any iPad program deserves its success, it's this one."
- Philip Elmer-DeWitt, C.N.N. Money

"It is not inconceivable that, at some point in the future, a short children’s story called The Fantastic Flying Books of Mr Morris Lessmore will be regarded as one of the most influential titles of the early 21st century."
– Ben Machell, The Times - UK