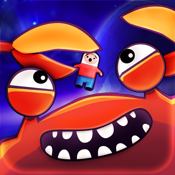 “The controls are perfect.” - Touch Arcade

"The crab smiled, the music and action picked right back up again, and I was hooked." — Pocket Gamer, 9/10

Once, every hundred years, Crabitron descends upon the civilized galaxy to teach humanity a brutal lesson — to stop eating his delicious crustacean brothers.

Humanity never learns. It's time for their lesson.

A lovingly crafted game about destroying the universe as a Giant Space Crab.

• Touch, pinch, and fling your claws to cause destruction
• Battle against waves of enemies, including sharks with frickin’ lasers
• Gobble Burgers of Power, burp fireballs and suck in everything
• Snap, crush and ruin everyone’s day... or life
• The world's most realistic Giant Space Crab simulation