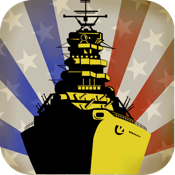 "Challenging and exciting" - AppAdvice.com
"Dreadfleet meets Axis & Allies" - BoardGameGeek.com
"If you want to get a whiff of the experience of commanding a fleet in the Pacific in a naval battle, this is your game." - iPhone Life Magazine

BATTLE FLEET is the ultimate WW2 naval strategy game. You are in command of a fleet of US or Japanese ships in the Pacific theater of war during World War 2.

As AppAdvice says "this ain't your grandma's game of Battleship!"

The game features turn based gameplay allowing you to move your fleet into position, aim individual turrets on each ship and sink the enemy fleet.

US Campaign - Play through unique and challenging missions as the Captain of the USS Knight.

Japanese Campaign - Take command for the Empire of Japan and experience the other side of the story.

Control an entire fleet of ships including Carriers, Destroyers, Battleships and more.

Hunt and Sink a powerful Battleship in the US Campaign. Launch waves of aircraft from your carriers.

Control the aim and power of each of your ship's guns.

Maneuver your ships to maximize their firepower with a full broadside attack.

Check out the full trailer and tutorial at:
http://www.BattleFleetGame.com