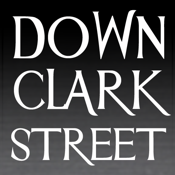 Tom Palazzolo began making films about Chicago in 1964 while a student at the School of the Art Institute of Chicago. Coming from St. Louis, he saw Chicago with fresh eyes and began a four-decade career documenting “the city of big shoulders.” Mayor Richard Daley, the riots at the 1969 Democratic Convention, the ethnic festivals and neighborhoods, wedding showers, the Nazis of Marquette Park, and the legendary Maxwell Street have all been captured by the Palazzolo lens.

In 1999 Palazzolo looked back on old film footage and photographs he had shot while living near Clark Street in the mid 1960’s, images that documented an amazing contrast the Chicago of today. Gone were the flop-houses, vintage barber shops, and colorful street people. They had been replaced by financial office towers, trendy restaurants and bars, and people in business attire. Palazzolo's nostalgic reminiscence blends his vintage footage with the new, and “On Clark Street” is a poignant recollection of those times and the Chicago that once was.

This CINEapp contains the entire film, amazing photographs of the residents of Clark Street, a POV written interview with Palazzolo by Robert Rayher, an essay by Jack Stevenson and commentary about the film’s premier on PBS in Chicago.
Take another look at the Chicago of the past, and further explore other aspects of this award winning film by a legendary filmmaker from Chicago.

"The love of events that bring people together, revealing at once the absurdities and tenderness of the human comedy, plus a sharp eye for Americana, characterize and permeate the Palazzolo films."
- Kevin Thomas, The Los Angeles Times

“Palazzolo is a person of interest and Chicago’s best known filmmaker.”
-Jack Helbig, the Chicago Reader

Palazzolo resides comfortably in his own sphere of reference,  a domain that includes a rich heritage of art history and film as well as his own personal memories. His familiar and gleeful attitude toward these weighty traditions allows him to draw from them freely while indulging in a virtuoso display of visual an verbal puns, sexual innuendo and  obscure references.”
-Callie Angel, Assistant Curator, Whitney Museum of Modern Art