This Day in Pink Floyd 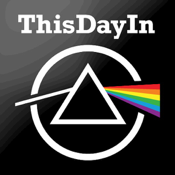 "The love and attention to detail that's gone into its creation is obvious. Top marks all round for this one" 10/10 iPhone & iPad The Essentials magazine

“All in all, it’s not just another app in the store” - Appolicious.

"Fans will not be disappointed – in fact, you might have to take the week off. Get it" Stuff Magazine

"Pink Floyd app is a must have for any Pink Floyd fan. The application provides fascinating Pink Floyd facts, complete song notes for every album, a Pink Floyd quiz and information on the band's activity, every day of the year." Rock Telegraph

"…a mammoth encyclopaedia of Floyd facts for every day of the year along with song notes for all 167 officially released Floyd songs." Planet Rock

See it on You Tube http://youtu.be/-xf5Kjnlq4A

Designed to bring you closer to the band, this App contains thousands of music facts covering 366 days of the year, a guide to every one of the 167 studio tracks the band officially released, as well as more than 100 Pink Floyd images, over 200 quiz questions, over 200 items of trivia, the rarely-seen, newly-restored video of Floyd's 1968 single 'Point Me At The Sky', a free ringtone ('Shine On You Crazy Diamond'), and two wallpaper screen images (the 'Dark Side' prism and the 'Wish You Were Here' cover).

The App will even play your own Pink Floyd music from your iTunes library – and connect you (via WiFi or 3G) to buy the tracks you don't already have!

All this, plus every conceivable official link.

Available as an App for iPhone, iPad and iTouch.

This Day in Pink Floyd is a way to immerse yourself in all of the aspects – audio, visual and factual – that made the band legendary.