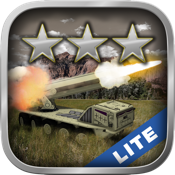 This is the lite version of Armament 2028, a traditional turn-based strategy game played on a hexagonal map.
Armament 2028 is a new game from developers of Assault Commander Ultimate.

Lizz Pons: "Few words can easily describe this game: Armament is the chess of war games."
CaptChris69: "This is without a doubt one of the best TBS games for a tablet that I have ever played."
Lauchlanair: "Great Game. If you like military strategy games get this one."