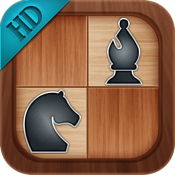 This is a game to be played by 2 persons.

You can play on the same device or by 2 devices on Internet.

Chess is a two-player board game played on a chessboard, a square-checkered board with 64 squares arranged in an eight-by-eight grid. It is one of the world's most popular games, played by millions of people worldwide at home, in clubs, online, by correspondence, and in tournaments.
Each player begins the game with sixteen pieces: one king, one queen, two rooks, two knights, two bishops, and eight pawns, each of these types of pieces moving differently. Pieces are used to attack and capture the opponent's pieces. The object of the game is to checkmate the opponent's king by placing it under threat of capture ("check") which cannot be avoided. In addition to checkmate, the game can be won by the voluntary resignation of one's opponent, which may occur when too much material is lost, or if checkmate appears unavoidable. A game may result in a draw in several ways, and neither player wins. The course of the game is divided in three phases. The beginning of the game is called the opening (with the development of pieces). The opening yields to the phase called the middlegame. The last phase is the endgame, generally characterized by the disappearance of queens.
Source: Wikipedia

The High Score will be published on Game Center.