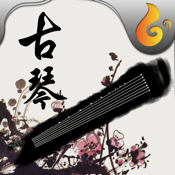 Magic, miracle and full of imagination… Guqin, a Chinese traditional instrument, brings us the newness with the combination of Chinese ancient culture. Its sweet and agreeable tunes with miraculous eastern appearance will take you to the music journey that you’ve never experienced. Maybe you don’t know music at all, or you have no ideas about eastern culture. It can’t prevent you from experiencing the charming eastern music from Magic Guqin. Even an impromptu can gives you, your family and friends much pleasure. You will definitely fall in love with it! Don’t miss it!!!

——Example: set up several examples of traditional Chinese music. And some classic eastern music is also played in Guqin.

Visit our Facebook page (http://www.facebook.com/MeetStudio) to see more screenshots and video and let us know what new features you would like to have.
If you like Magic Guqin, please write us a review on iTunes or Twitter. Your support would greatly help!

Note: To enjoy best audio effect, we recommend you not to use full volume