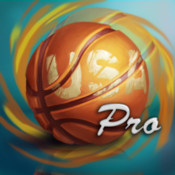 ★WIDE SELECTION OF BALLS
Who says you can only play basketball with a basketball ball? Compete with your friends on detailed animated locations using a variety of different balls with unique characteristics directly influencing the game play. Select the most convenient ball to set your records!

★UNIQUE MODES★
H.O.R.S.E mode With Multiplayer and Bot game!
In H.O.R.S.E, the object is to be the last to accrue the five letters, H.O.R.S.E. The shots in H.O.R.S.E are trick shots and/or lucky shots designed to make the other person miss. H.O.R.S.E is played with two or more people.
In H.O.R.S.E, player #1 is allowed to shoot from anywhere on the court. If he makes the shot, then player #2 must duplicate the same shot from the same position. If player #2 misses, he/she receives the first "letter" from the word "horse", "H". If player #2 makes the shot, no letter is given to either player, player #2 receives control of the ball, and he/she can select a new shot from anywhere on the court.
If player #1 missed his original shot, then player #2 would also be free to shoot from anywhere on the court. In either case where player #2 selects a new shot, the play proceeds as before: if he/she makes it, it forces the next player (player #1 if there are only two players; or #3 if there are more than two players) to try and duplicate his made shots; should he/she miss, the next player has a free shot selection.

★ACHIEVEMENTS
USA Basketball will absorb you for a long time with a lot of possible achievements, some of them will require efforts from you.