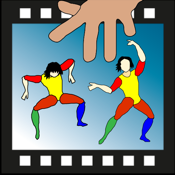 iAnimate Pro is a very functional, powerful and advanced cut-out puppet, Stop-Motion, frame after frame animation app, taken to the limits of the magical iPad.

In this app you can assemble your own puppets with moving parts out of your own images in your iPad photo album. You can easily animate them in the app, moving the puppets and moving the parts of the puppets frame after frame.

Think of the amazing Lotte Reiniger puppet animations. Or think of Park south animation. The possibilities are endless.

You can make animations with several puppets.

iAnimate Pro includes a background image, a fairy tale landscape, and two elaborate puppets with moveable parts, a fair maid and a black horse, which you can use for your first animation.

In the puppet/figure editor you can make puppets out of any images with transparency from you photo album (It is nearly like assembling a shadow play puppet in real world):

- Then import another image of a part of the puppet, which you want to connect to the selected body part. Place the anchor on the rotating point of the moveable part.

- Go on importing more parts, anchor them, until your puppet is finished,

- Save it by name

In the film editor you can

- Import any image from your photo album

- Import any puppet from your figure editor

- Move, rotate, and scale the image or figure freely

- Show or hide your image or figure

- Lock the “move, rotate and scale” function for any chosen image if needed during the animating.

- Create as many project as you wish

- Save them by name

- Export every animation as a movie to photo album

- Select frame speed of the animation

- Get direct access to a rich homepage with video tutorials and templates.

Get png images with transparency in different ways:

- Erase the background of a selected image in the photo album in an eraser app, which can export with transparency to the photo album of the iPad, for example the app, "Precise Eraser with Alpha".

- Draw and paint your own figures in a drawing app, which can export images with transparency. "Sketch Club" is useful in that respect.

- Create images in real world. Scan or take photos and import them to the iPad's photo album by wifi, mail or Camera Connection Kit. Erase the background in an eraser app.

- Publish your animation to social sites

- Open the animation from the photo album in any movie editor app, and add text and sound, or edit it in a movie editing software on your PC or Mac.

N.B.: This animation app is for, teens, adults and artists, who like to make elaborate animations.

If you find any bugs, please contact us by email. We will correct it very soon.

For a simpler but powerful cut out animation "Monty Python" app, look to “iAnimate Collage”.