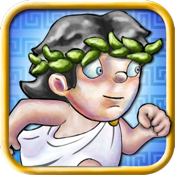 Help Pheidippides to reach Athens!.
Athens Adventure is ★very simple to play★ game but, remember!!, it's almost impossible to finish :). ★★★We challenge you to reach Athens!!!!★★★

Pheidippides must to avoid the evil Hades, Medusa and many more enemies while getting coins to buy the power ups given by Gods!.
Five worlds:

Remember the Legend!:
In 490 B.C. an army from Persia landed on the plain of Marathon, about twenty-five miles from Athens, with the intention of capturing and enslaving that city. The Athenians prepared for a battle that would determine the course of history for centuries to come. A victory for the powerful Persian Empire could destroy the independence of the Greek city-states and effectively end Greek civilization and culture.

But Athens wins!! and when Persia was dust, all cried, "To Acropolis! Run, Pheidippides, one race more! the meed is thy due! Athens is saved, thank Pan, go shout!"

Keen reflexes and the use of power ups given by Gods are your best weapon to avoid the enemies and hazards in your path!

• Triple jump from Hermes (the god of travel).
• The wings of Icarus
• The immunity of Zeus.
• The magnetic power of Ploutus (the god of wealth).