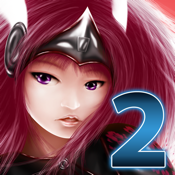 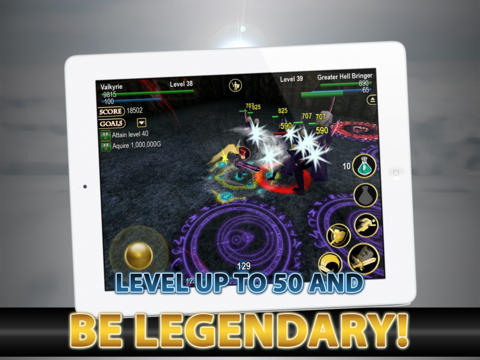 US Role Playing What's Hot #17! Join over 100,000 players in Valkyrie combat and smash your way through hordes of evil minions in this epic fantasy adventure!

••••• 5 stars! - Some games with less impressive graphics are the best. This is an example. -Mikityo

• NOT A "FREE-IUM" GAME!
The game is completely FREE to play! You can complete the game - over 20 hours of content, without a single purchase! (Though we appreciate "donations")

Amidst the chaos, the Valkyrie Maidens are ambushed and taken by Dratok. Only one Valkyrie is left behind - stripped of power by dark magic, you must lead this Valkyrie on an epic adventure to restore her might and save the her sisters.

• MASSIVELY HACK AND SLASH
We set out to give you the best ARPG (Action RPG) experience on your mobile - one of the best Hack & Slash, Dungeon Crawling, Boss Slaying, Gear Looting Valhalla! (For Diablo fans - It's like having Diablo on your phone!)


ALL THESE AND MORE FOR FREE!
• Over 200 weapons, shields, armor and trinkets to collect and dispose your foes with.
• Over 500 dungeon rooms to battle through.
• Train your Valkyrie through 50 levels - get IMBA!
• 92 Achievements to gain.
• Play anyway you want! Choose strength, intellect, dexterity or a mix build for your Valkyrie.
• Experience the ultimate test of skill and tenacity when you unlock Infinity Gauntlet!
• 12 Game Center Leaderboards - Multiplayer competition online to be the best Valkyrie Commander
• FightPro combat system makes you battle like a boss.
• Immersive fantasy music score and soundtrack.
• True 3D surround sound. (Plug in your headphones!)
• Slash© game engine allows you to battle in full 3D with silky smooth battle animation and effects.
• Hours of fun-filled adrenaline action at your fingertips.

Thank you for playing Valkyrie Gauntlet 2 - The Massively Hack and Slash Game!