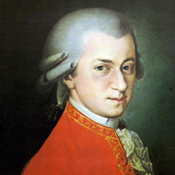 Wolfgang Amadeus Mozart(27 January 1756 – 5 December 1791), was a prolific and influential composer of the Classical era. He composed over 600 works, many acknowledged as pinnacles of symphonic, concertante, chamber, operatic, and choral music. He is among the most enduringly popular of classical composers.
Mozart showed prodigious ability from his earliest childhood. Already competent on keyboard and violin, he composed from the age of five and performed before European royalty. At 17, he was engaged as a court musician in Salzburg.
Mozart learned voraciously from others, and developed a brilliance and maturity of style that encompassed the light and graceful along with the dark and passionate. His influence on subsequent Western art music is profound. Beethoven wrote his own early compositions in the shadow of Mozart, and Joseph Haydn wrote that "posterity will not see such a talent again in 100 years."

Mozart Serenades app review: listen to the maestro. No one can deny the prodigious works of Wolfgang Amadeus Mozart, and with Mozart Serenades for your iPhone and iPad you’ll be able to enjoy some of his truly stunning serenades whenever you want!