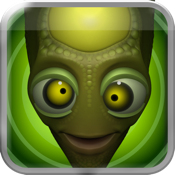 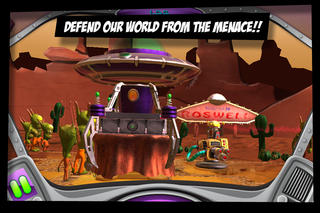 STOP THE ESCAPE
Be on the lookout—the universe’s most-wanted goofy aliens are trying to make a run for it! With a space patrol ship and an arsenal of otherworldly weapons at your disposal, stop these dim-witted alien prisoners from making the great escape. But don’t wait too long to make a move or they’ll use mind-control beams to stop you!

ON PATROL
Fast-paced missions combine real-time strategy and first-person shooter skills to stop the escaping mass of aliens. Over-the-top action and alien surprises will keep you on your toes. Round up escaping aliens, battle alien robot bosses and prepare for the ultimate alien showdown.

AMPLIFIED REALITY
Bring the zany, intergalactic battle into your world with AR technology that creates the ultimate 360-degree gaming experience on your tabletop. Customize your battle plan on the fly with movable AR markers that transform into wacky weapons when viewed through a smart device. Use gun turrets, Tesla coils, electric barricades and warp generators to fight the alien outlaws across the galaxy.

AppGear TOYS - AMPLIFIED REALITY
Win the war against boredom! AppGear is a line of apps that interact with collectible figures and customizable toys to create a new reality in gaming.

NEED A MARKER TO PLAY?
If you don't have the toy handy, you can print out a demo marker for free from the appgear website:
http://appgear.com/en/games/alien-jailbreak/demo