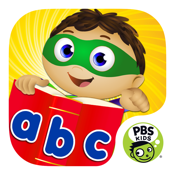 **Parents' Choice Gold Award Winner**
Are you ready to go on an around the world, ABC adventure? With the “SUPER WHY ABC Adventures: Alphabet” app for iPhone/iPod touch, your child can do just that while playing a comprehensive collection of five interactive literacy games that help build strategies and skills to master the alphabet! With each game hosted by a different Super Reader, your child will be introduced to uppercase and lowercase letters and their names, the order of the alphabet, common letter sounds and writing letters in fun and exciting ways!

ALPHA PIG’S LICKETY LETTER SAFARI
Go on a lickety letter safari with Alpha Pig by identifying letters in the jungle and taking pictures of safari wildlife from A to Z!

PRINCESS PRESTO’S UNDER THE SEA SOUNDS
Swim under the sea with Princess Presto while matching all twenty-six letters to their sounds to form words!

SUPER WHY’S Z MARKS THE SPOT
Help Super Why follow the alphabet trail in ancient Egypt, by connecting the dotted letters on an interactive map to reveal special treasures!

WONDER RED’S LET’S LETTER FLY
Fly around the world with Wonder Red in her Why Flyer collecting treasures in her Wonder Words Basket, while practicing with common letters sounds and objects that begin with them!

WOOFSTER’S GOLDEN LETTER BONES
Collect all of the golden letter bones with Woofster in the Wild West by writing all twenty-six letters of the alphabet in uppercase and lowercase!

MAP OF THE WORLD STICKER ACTIVITY
Earn over 400 themed souvenir stickers that you can use to decorate 8 themed backgrounds around the world! You can also save your pictures to share with family and friends.

ABC SING-ALONG-VIDEOS
Watch and sing-along with four alphabet themed music videos that expose your child to all twenty-six letters!

ABOUT SUPER WHY
SUPER WHY, the breakthrough preschool TV series on PBS KIDS, is designed to help kids ages 3 to 6 with the critical skills that they need to learn (and love) to read! For more exciting SUPER WHY online games, music and activities visit pbskids.org/superwhy.

ABOUT OUT OF THE BLUE DIGITAL
Out of the Blue Digital is a division of Out of the Blue Enterprises, a leader in children's educational entertainment.

Staff Reviews
SUPER WHY ABC Adventures app review: see all that the world has to offer while learning the alphabet

If you have a child between the age of three and six who enjoys watching SUPER WHY, the TV series by PBS Kids, then SUPER WHY ABC Adventures is a must-have app on your iPhone or iPad.