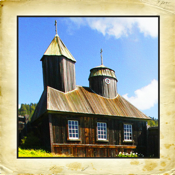 It’s a little-known story that the first Russians came to the California coast in 1803. Driven by hunger and profit, officers of the Russian American Company sailed south in search of treasure, especially the sea otter furs that commanded a high price in China. Nine years later, in 1812, they established a settlement north of San Francisco at Fort Ross, which today is a beloved state park.

Now, on the bicentennial of the founding of Fort Ross, a new interactive app tells the colorful stories of the early years of Russian settlement, incorporating striking photos and paintings, videos and music, as well as short essays and letters. Included is an informative interactive guide to the grounds, buildings, and artifacts faithfully restored at Fort Ross State Historic Park, where thousands of California school children stay overnight to learn about the early Russians.

This app brings the adventures of California’s earliest explorers to life. Read about the wealthy Russian count who romanced the beautiful daughter of the Spanish Presidio commander, but died en route to Moscow before he could claim his bride. There's also the story of the serf who rose to power as a leader of sea-faring hunters, who narrowly escaped being murdered after a shipwreck on the Olympic Peninsula. You'll hear the tale of a Russian deserter who helped lead the Chumash Indian revolt in Santa Barbara, along with the story of St. Peter the Aleut, an Alaskan native hunter who was tortured and killed by a Spanish priest for refusing to renounce his adopted Russian Orthodox faith. You'll also hear the true voices of Californian and Alaskan natives whose skill and courage were critical to the survival of these early Russian settlers.

Russian California: Hidden Stories from Fort Ross and Beyond also follows the trials and joys of the many Russians who came to California to escape war and revolution in the early 20th century. Many were processed at the Angel Island Immigration Station in San Francisco Bay, including a favorite daughter of novelist Leon Tolstoy, and the celebrated composer of Peter and the Wolf, Sergei Prokofiev, whose sarcastic retorts to immigration officials are recorded here.

Published by the California State Parks Foundation and produced by Sol Editions with Wild Blue Studios, this rousing story of California's early Russian adventures was sponsored by the Renova Fort Ross Foundation, and includes music from the famed Slavyanka Men's Russian Chorus.