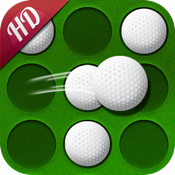 This version is for iPad.

"Peg solitaire is a board game for one player involving movement of pegs on a board with holes. Some sets use marbles in a board with indentations. The game is known simply as Solitaire in the United Kingdom where the card games are called Patience. It is also referred to as Brainvita (especially in India).
According to a popular story, the game was invented by a French aristocrat in the 17th century, when incarcerated in the Bastille, explaining the game's less common name Solo Noble. John Beasley (author of "The Ins and Outs of Peg Solitaire") has extensively searched for evidence to support this, and has found it lacking. The first reference to this story appeared in 1810, more than a hundred years after the alleged event. He believes that the colorful tale is fiction, yet it persists. In other sources, the invention of the game is attributed to the Native Americans—there is also no evidence to support this.
The first evidence of the game can be traced back to the court of Louis XIV, and the specific date of 1697, with an engraving made that year by Claude Auguste Berey of Anne de Rohan-Chabot, Princess of Soubise, with the puzzle by her side. Several works of art from that time show peg solitaire boards, demonstrating that the game was highly fashionable.
The standard game fills the entire board with pegs except for the central hole. The objective is, making valid moves, to empty the entire board except for a solitary peg in the central hole."
Source: Wikipedia.