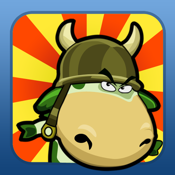 Welcome to the new, breakout, smash hit mobile game that's taking the world by storm! Anitopia is a animal tossing, castle defending, fruit and veggie slicing, addictive and fun ride. Big thanks to all our fans! You asked for it, here it is!

"Anitopia plays like a spectacular mashup of games like Plants vs Zombie, Angry Birds and Fruit Ninja! It takes the best of several popular gaming styles and combines them into one single title with plenty of action. 4 out of 5 Stars" - theiPhoneApp Review

"If you like having your cake and eating it to, then Anitopia is a mash-up that will make you happy!" - AppCraver

"Anitopia turns similar games on their head! 4 out of 5 stars." - Appixis

Anitopia is a mash up of epic proportions! Its the first game that combines three (YES, THREE!) of the most popular game play styles in the app store into a single and hilarious new app.

Since the dawn of time, animals have worked together to get things done. From living in packs to huddling together for protection, animals have always understood the concept of team work and living free. In Anitopia, the new mobile game from Roamza, animals decide to take team work to a whole new level. What happens when animals decide to stop being cute and cuddly and decide to live free again? Mayhem, fun and a little bit of craziness. Anitopia is putting animals back in the driver’s seat.

- Awesome multi-style game play!
-  Cool animated graphics and backdrops
- Fling a cow to incredible heights!
- Make an Elephant fly!
- Shoot dogs from a cannon!
-  15 different types of animals to defend three unique city, circus, and farm chapters! From a pie throwing cow to a bazooka shooting bear, this game has it all!
- Build your defense - Defend your animal kingdom!
- Slash your way through fruit and veggie slinging Boss levels!
- Hours of unlock-able gameplay!
- Hilarious sound effects and a great sound track!
- Achievements that can be unlocked for maximum game score!
- Online worldwide leader-boards with Game Center!
- Share with your friends on Facebook and Twitter!

Email us at [email protected] with your suggestions and comments. We value your feedback and thank you for your support!