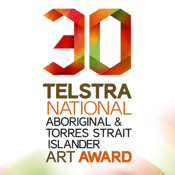 The 30th Telstra National Aboriginal & Torres Strait Islander Art Award aims to annually showcase the very best of Australian Indigenous art. The Award was founded by the Museum and Art Gallery of the Northern Territory (MAGNT) in 1984, and remains the Australia’s first and longest-running award dedicated to Indigenous artists.

The App features:
• all 77 pre-selected artworks; with Artist’s details, media and dimension of the artwork,
• Artist statements about each artwork; in written and audio formats,
• Detailed images of each artwork,
• Video of 3D and selected New Media artworks,
• A special ‘Winners’ section featuring all the winning artworks,
• save your 'favourites' functionality
• QR reader to reveal bonus material in the art gallery
• Artist profiles
• Artwork search

To access the Online Gallery and for more information, visit www.nt.gov.au/natsiaa

Awards Background
Since 1992 Telstra has been the Award’s major sponsor. The sponsorship includes $60,000 in prizes.

The non-acquisitive Telstra Award of $40,000 is awarded to the work considered by judges to be the most outstanding work in the exhibition.

The Award is open to all adult Aboriginal and Torres Strait Islander artists. There is no particular theme or restriction regarding work that can be entered.

Winners were announced at the exhibition opening ceremony at the Museum and Art Gallery of the Northern Territory in Darwin, Australia on Friday 9 August 2013.

A People’s Choice Award is presented to the artist whose artwork receives the highest number of votes from visitors to the Award exhibition and online gallery (there is no prize money for this award).

Disclaimer:
The Northern Territory Government of Australia is not endorsing any provider of products or services by facilitating access to information about these providers from its web pages or app, nor does it accept responsibility for the quality of goods and services provided by third parties accessed through our web pages or app.