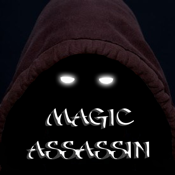 Magic Assassin is a real-time RPG that incorporates stealth and tracking. Players use iOS devices to cast spells to attack and defend.

As players gain experience points, they will be able to upgrade the strength of their spells, and increase their chances of casting successful spells (attack and defense). Once a player has attacked their target, they will be given a new target (if there are more than two players in the game), and they will need to get close to them to cast another spell. While a player is tracking down their target, they may also be hunted down by other players. Every player is a potential threat.