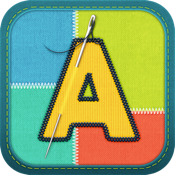 If you like playing challenging, fun word games then you will enjoy playing Agoro Word Game.

Imagine a three in one game that combines the best of all your favorite word games while making the gameplay more intuitive.

Unlike other games that can inadvertently give an advantage to one player based on the letter selection, Agoro Word Game start all players at the same level – Ground Zero.

At all times, you and your opponent(s) either have the same letters or the whole 26 letter alphabet, allowing you to compete only based on the breadth of your vocabulary.

Agoro is a fun, multiplayer word game...  It is an addictive, easy to play three-in-one- game that requires strategy and mastery over words to win.

Come pitch the breadth of your vocabulary against that of the computer or other random players.

Test your puzzle-solving skills and learn new words as you play this amazing three-in-one iOS game. There is even a tournament mode where up to four players can play together in a single game... Awesome indeed!!!

Has both free and paid versions
Currently optimized for iPhone, iPad and iPod Touch
Three-in-one Word Game
Beautifully intuitive UI and simple gameplay
Fun, addictive and social learning game. Up to four people can play at the same time
It has single player mode, multi player and tournament modes
Play against the clock
Play against the computer or against random opponents
Facebook Integration
Game Center Integration
Use all 26 letters in the alphabets all the time
Share high scores with friends on Facebook
Built for IOS 4 and later versions
Over 100,000 unique words in the dictionary

Letter to Word
L2W helps players gain mastery over spelling of words. Your opponent challenges you to dive into your vocabulary to come out with words that will help you gain the points at stake. You have all the letters of the alphabets available to you each time and you can play a letter at a time. It has a unique and interesting gameplay as it is played letter by letter.

With WS, players are given the same seven or more letter words and each player is supposed to form as many words as possible from the letters that make the base word. The game is played against time and whoever forms more words within the allotted time wins the points. Whoever accumulates most points within the given time wins the game.