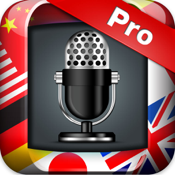 Awesome Translator Pro is the ultimate translation tool on your iPhone/iPod touch. Translate any sentence or phrase into any destination language, and enjoy a set of useful add-on features such as text-to-speech, history tracking, search, landscape display options. Whether you're learning a new language, traveling through other countries or just need to translate an Email/SMS, with Awesome Translator Pro you're never again lost in translation!

✔ 60+ languages
Translate words, phrases and text into over 60 languages.

✔ Listen
Listen to spoken translations in over 20 languages.

✔ Instant, easy translation
- Quickly input whatever sentences/phrases/words you'd like to translate and get translated results instantly.

✔ Conversation mode
Text-to-speech translation makes it easy to have a natural conversation with someone in a foreign language.

✔ Swipe to Paste
Convenient: You can use the swipe gesture to automatically paste and translate text from your clipboard.