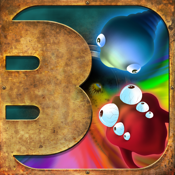 In Boson HD, you control the MPA, or Massive Particle Accelerator at Boson Labs. There are 2 laboratories, the Laser Lab and the Portal Lab, with a different games to play in each.

In the first, Laser Lab, your job is to use the sorting laser to fire the particles into the correct trap. You move the laser up and down to pick up the particles as they float past, and fire them into the traps of the corresponding colour. Be careful not to fire any into the wrong one as this will blow up the trap. You can destroy unwanted particles by tapping on them and accelerate the particles on the laser by aiming it into and then tapping on the trap. As you trap the particles they appear in the containment cells at the bottom of the screen. Whenever 3 particles of the same colour are trapped in any of the containment cells, they explode, boosting your energy. Be careful when picking up the bonuses, not all of them are a good thing. To pick up a bonus when they appear, just tap on them. In this lab there are loads of achievements to collect, as well as the frustratingly addictive gameplay!

In the second lab, the Portal lab, things are a bit more chaotic. Particles float in from all directions, being sucked into the portal. You need to guard the portal and only allow particles in that match the plasma field to be sucked in. Every particle of the wrong colour drains the energy from the MPA Plasma Field, which is the only thing stopping the MPA going into meltdown. Your job is to maintain this field by recharging it with the right particles and bonuses, which will test your powers of concentration as well as both your mental and physical dexterity to the limit.