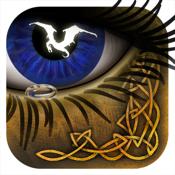 Book I. Secret of the Princess’s Amulet

Long ago in a wonderful castle, a beautiful blonde princess named Snow was born. Just like any other princess, she enjoyed stories about distant lands, poems, and the music of a six-string lute, but sometimes she could not help climbing the ivy-covered walls of the castle (of course the King and the Queen did not know about this). Two loyal twin pages never left her, even for a minute, and the princess dearly loved her friends and defenders – the Peacock Quill Page and the Eagle Quill Page.

But even they did not know her main secret! The blue translucent stone on her neck, clutched between the claws of gold and silver dragons fighting for the treasure, was not just jewelry, but a strong amulet. The true purpose of the relic was known only to her parents and a single witch. But there was another secret and the princess shared it with no one – the prediction of an eccentric Indian fakir from the Orient, which he whispered into her ear.

Why did the princess and her inseparable friends go on a dangerous sea adventure? What did the wisest king of a distant country, famous for his gift of being a Dragonslayer, tell her? And who are the Dragonslayers?

If you like adventures and adore solving mysteries, you'll love the philosophical tale about glorious times when dragons lived on Earth, and rulers and priests used to ask the bravest, battle-hardened warriors, “Do you believe you can slay a dragon?” Such faith ruled the Earth, and children were taught to be victorious from a very early age; for there is no greater glory under the skies than the fame of a Dragonslayer. But to perform such a feat was extremely difficult, and few men wore by right the Dragon Stones around their necks.

The tale is designed like an ancient book and gracefully illustrated. Each chapter is accompanied with a unique sound track and beautiful light effects.

About the author: Alex Akamen is a children's book writer and journalist, winner of the tale writing contest held by the Our Texas newspaper and the creative community, Reserve Tales.

Details:
• Great graphics, created by hand without the use of computer software;
• Five different, unique sound tracks reminiscent of the music of the Middle Ages, composed especially for this project;
• Automatic scrolling with speed control;
• The possibility of choosing the font and changing its size;
• Multilingual text: Russian, English, French, Italian and Spanish;
• Beautiful light and sound effects.

Feel free to send questions and suggestions to the following address: info@activepads.com