New 7 Wonders of the World 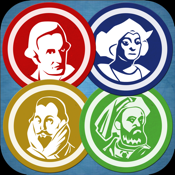 We all know about the original 7 wonders of the world.
The new 7 wonders of the world were ‘elected’ by more than 100 million voters throughout the world and were announced at the Official Declaration Ceremony in Lisbon on 7 July 2007.
They are: The Great Wall of China, Machu Picchu, the Statue of Christ the Redeemer, the Taj Mahal, the Colosseum, Petra, and Chichen Itza.

Features of the game are:
•Players choose to be James Cook, Marco Polo, Francis Drake or Christopher Columbus as they play the game.
•The goal of the game is to travel round the world and be the first player to reach all the New 7 Wonders, and gain the most points through accumulating assets (cash, bonus steps, wallet items and monument sites) during the game.
•Players start each quest from one of 6 starting cities – Sydney, London, Tokyo, New York, Moscow or Cape Town.
•As they travel round the world, players can learn about the history, culture and geography of cities and countries they pass through. It is both fun and educational.
•As players move around the board they answer questions, make decisions, earn money, and obtain free flights and other rewards.
•The game finishes when the first player has reached all 7 monuments, and the winner is the player who has accumulated the most points during the game.
•The game can be played by people of all ages, either singly or with up to 4 players at any one time.