Top 100 soccer players of all time 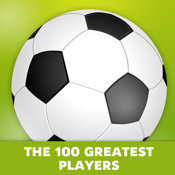 
And who are the greatest football players of all time?

Fans have hotly debated this question, during every generation, in which a professional soccer has been
played.

It’s true, that most of you will would either say Diego Maradona or Pele, to which many of you may agree
with no doubt, but to be sincere there are indeed other notable great football players who have made their
mark on the football field.

The list is created on a poll based on the opinion of more than 100.000 interviewed readers.

It may happen that the list will misplace your favorite player, but that's how it is.