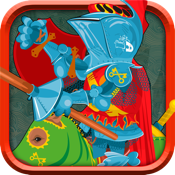 Dirk the Brave and George, his brother, are two of the bravest knights in the kingdom.

Whenever a problem arises in the realm, the king calls upon these brave medieval knights to save the village.

But this time, it is not clans that are attacking. It is not the goblins or the orcs that bring battle.

No, this time, the princess has been kidnapped by the clash dragon.

You must rescue the princess. Time is running out, so you must race to the dragon’s castle to save her.

You control both brothers on an epic journey to climb the castle walls to reach the dragon and defeat it.

But the dragon is clever, and will likely escape.

With the help of kingdom wizard, you’ll have magical abilities to reach the dragon, and to eventually battle it and rescue the young queen.

Complete all 12 levels to finally battle the dragon and win the game.

Excellent power ups are available to help, including the shield, the collect all stars, and the slow time spell.

What are you waiting for? Get started now!