A Game of Bombs 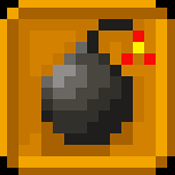 You have been captured inside a deep dungeon - but with the help of a magical fairy and plenty of BOMBS you can escape!
Select a hero and fight your way through an exciting campaign.
Use all of your skills to kill the epic bosses at the end of every one of the four chapters.
A mixture between logic, strategy and action make for an unforgettable adventure!

Face up to four human opponents in epic bomb throwing frenzy in the online multiplayer mode. Compete for Power Ups to get an edge over your opponents and blast them to pieces!
Inspired by the classic Bomberman this game features neat 16-bit style retro graphics, an original soundtrack and nostalgic sound effects.

By touching the hero or the bomb symbol at the bottom right of the screen you can drop bombs. You have to explode crates and kill the monsters to get to the exit. But the exit is not always visible and some monsters will follow you inexorable. Reaching the exit very quickly and killing all of the monsters with as little bombs as possible will raise your score and earn you up to three stars per mission.