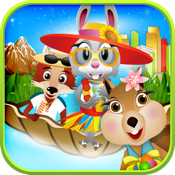 ****I liked everything about this app! My students were engaged with the activities, and it targets all of the prepositions that I need an app to target! I really like that you can target the prepositions either expressively or receptively. The pictures that are used in the expressive activity are clear, and my students enjoyed creating sentences to describe the pictures.(Speech Universe)****

The Prepositions Journey app was developed by a certified speech and language pathologist to aid practice with early/common prepositions. Children will have fun practicing prepositions with three animals who appear in three different colorful, animated scenes: camping, island, and city.

•Receptive tasks: Children identify animals in different locations on the scene, for example, “Show me the bunny in the basket.”

•Expressive tasks: Children verbally respond to “where” questions, for example, “Where is the bunny?”

Prepositions covered by this app include:

In, on , under, next to, in front of, behind, in the back, between, above, below, beside, in the middle, outside, out, over, near, far, on the side, on the left, on the right