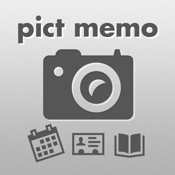 “pictmemo for iPad” is an app whose note is made with a photograph.

“pictmemo” is not a Cloud-oriented app.
A memo photograph is taken with iPad with which it is always walking around, and it checks on the screen of the iPad, and if necessity is lost, it will throw away.
How to use such simple iPad is proposed.
(But, of course, it corresponds to the preservation to a camera roll, and cooperation with the app which can process a picture. )

Since “pictmemo” saves a picture in own app, the standard camera roll for iPad is not soiled.

Therefore, the very regrettable state where the memo photograph for the purpose of record is mixed in a lovely photograph can be prevented.

A receipt, a signboard, a timetable, TV footage, the label of wine, a card, the tag of the goods worried in the store.

Let's make a note of anything with a photograph.

===== functional explanation =====
[Photography mode]
- An upper half will become camera area if it starts.
- If the tap of the arbitrary positions of camera area is carried out, AF-AE will work.
- A photograph will be taken if the tap of the shooting button is carried out.
- A lower half is the thumbnail area of the taken photograph.
- If you click a thumbnail, it will change to display mode.

[Tips]
- If acting it as Flick of the shooting button, it can move a place.
- Correspond to rotation of a device.
- An action button changes a function according to context.
- When the number of selection pictures is one, an extension can pass a file to the app corresponding to ".jpg."
- When a selection picture is plurality, PDF other than facebook and a camera roll can be created, and PDF can be passed to other apps.

* Deletion of an app will also eliminate an internal picture. Please be careful.
* I recommend you to change an important picture into PDF and to pass iBooks.