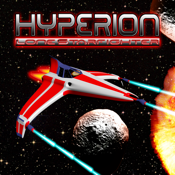 Blast off in the first episode of Hyperion - Lone Starfighter.

Intelligence has come to light which suggests aliens have setup a base on the outskirts of Plebea (turn left at Uranus, you can't miss it) and are planning to invade, conquer and generally make a nuisance of themselves here on Earth. Now because of the recent spending cuts at Earth H.Q. we've only got 1 ship capable of stopping them (in fact we've actually only got 1 ship, whether or not its capable of stopping them is a moot point) and if you could use it to nip out and destroy their base that would be great.

Before you go, we thought we should mention that the technicians 'forgot' to put ammo in your wing cannons (its also difficult to get good staff after the spending cuts) so you've only got what is effectively a pea shooter to defend yourself with!! But fear not, apparently you'll find some drifting power up cells along the way which you can collect and convert into weapon upgrades (including ammo for your wing cannons), additional health or a temporary shield. Don't ask how we know this...we just do.

In this first episode, you will have to negotiate (obviously we mean destroy) a couple of asteroid belts of varying density, waves of aliens which weirdly get tougher the closer you get to the red guardian and then finally you'll need to defeat the red guardian himself. He's a tough cookie (actually he's a robot, designed by a 10 year old lad called Graham, who could’ve made it soft and fluffy but no, he wanted lasers shooting out of its eyes, a fireball shooting cannon for an arm and a single point of weakness which is its laser shooting eyeballs (kids can be so fiendish!!), so if you think the robot is too tough, take it up with Graham, it’s not my fault!!) but if you keep your wits about you we're sure you'll be fine...probably.

So, pilot, what are you waiting for?

Power ups
=======
Health: Just when you thought you were about to pop your clogs.

Shield: 10 seconds of pure invincibility. Use your ship like a big silver hammer. Smashing.

Proper Laser: Now that’s a proper laser. Once you’ve got this you’ll keep it unless your ship gets destroyed, in which case you won’t really need it any more, will you?

Triple-shot: The one the technicians forgot. Bring your wing cannons to the party. This one’s a bit flaky though. It’ll stop working if you take a hit so be careful!!

By the way, you can combine the Triple-shot and Super Laser to create a Super Triple Laser (or a Triple Super Laser, whichever you think sounds best).

There are 2 control methods for your alien squashing pleasure.

Touch (Recommended)
-----------------------------
Your ship is controlled by touching and dragging on the screen. Whilst you’re touching the screen your ship will auto-fire (so you don’t have to, yay!). If you want a super burst shot then tap and hold the ‘Charge Laser’ button. This will take out even the biggest asteroid in a single shot…we think. Let us know how that works out for you.