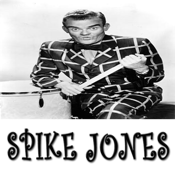 This app give you free access to over 50 plus episodes of Spike Jones performance.

Lindley Armstrong "Spike" Jones (December 14, 1911 – May 1, 1965) was an American musician and bandleader specializing in performing satirical arrangements of popular songs. Ballads and classical works receiving the Jones treatment would be punctuated with gunshots, whistles, cowbells, and outlandish vocals. Through the 1940s and early 1950s, the band recorded under the title Spike Jones and his City Slickers and toured the United States and Canada under the title The Musical Depreciation Revue.

After appearing as the house band on The Bob Burns Show, Spike got his own radio show on The Chase and Sanborn Program, as Edgar Bergen's summer replacement in 1945. Frances Langford was co-host and Groucho Marx was among the guests. The guest list for Jones's 1947-49 program for Coca-Cola (originally The Spotlight Revue, retitled The Spike Jones Show for its final season) included Frankie Laine, Mel Torme, Peter Lorre, Don Ameche and Burl Ives. Frank Sinatra appeared on the show in October 1948, and Lassie in May 1949. Jones's resident "girlsinger" during this period was Dorothy Shay, "The Park Avenue Hillbillie." One of the announcers on Jones's show was the young Mike Wallace. Writers included Eddie Maxwell, Eddie Brandt and Jay Sommers. The final program in the series was broadcast in June 1949.

The very name of Spike Jones became synonymous with crazy music. While he enjoyed the fame and prosperity, he was annoyed that nobody seemed to see beyond the craziness. Determined to show the world that he was capable of producing legitimate "pretty" music, he formed a second group in 1946. Spike Jones and His Other Orchestra played lush arrangements of dance hits. This alternate group played nightclub engagements and was an artistic success, but the paying public preferred the City Slickers and stayed away. Jones wound up paying some of the band's expenses out of his own pocket. Some of the City Slickers band members appeared and recorded with the Other Orchestra, but most of the Other Orchestra personnel consisted of "serious," accomplished studio musicians from the Los Angeles area.

If you like our app, please rate and review it.