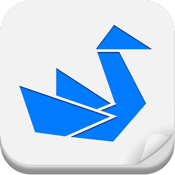 紙ラボ (Kamilabo)は3Dデータからペーパークラフト用の展開図を簡単に作成できるアプリです.
Kamilabo lets you make a real paper models from 3D digit model. Kamilabo has been designed both for the iPad and iPhone with multi-touch gestures support to view (zoom, pan and rotate) and edit (paint and simplify) a 3D model, to generate a printable paper pattern for that 3D model.

You can use build-in example models or directly import models received by Email (or downloaded from the Cloud e.g. DropBox). With Kamilabo, you can also modify the structure of a 3D model and paint on the surface of that model, after Kamilabo generates the patterns and prints them out via a Home/Office printer, you can rebuild a real physical paper model in following steps:
1.Cutting along boundary of the pattern.
2.Folding patterns according to the “mountain line”/ “valley line” generated on the printed-paper.
3.Gluing each connected patches according to the gluing area and number indicator.

With Kamilabo, you can improve the innovational consciousness and practical ability for you and your kid during the cutting, folding and gluing process. At the same time, you can also get a beautiful real model made with paper.