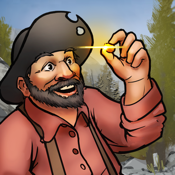 "1849 ... might just be the only real city-building game on iOS" - Owen Faraday, Pocket Tactics

The year is 1849, and gold has just been discovered in California. You decide to head out west, to seek fame and wealth in the approaching Gold Rush.

Will you strike it rich and become an overnight mining magnate? Or build your fortune bit by bit by supplying 49ers with pickaxes and blue jeans?

1849 is a city management game set during the California Gold Rush. Your task is to build towns, populate them with workers, and keep your citizens housed, fed, and entertained. You’ll have to manage and coordinate extensive production and trade networks to make sure your towns thrive.

Updated with two new scenarios!
The Epilogue presents two final scenarios, taking place in the period after the gold rush, as the people of California attempted to forge a new identity in a state that went through an irreversible transformation.

- A campaign mode that traces the development of the Gold Rush from mining camps to bustling cities. Each city scenario presents players with unique starting conditions, victory goals, and obstacle events.
- Sandbox mode with a procedurally-generated map for your location, based on geography (from the Pacific coast to the Sierra Nevada mountains), precipitation, resource availability, and starting lot size.
- Vivid Old West towns with geography and architecture directly inspired by California’s Gold Country.
- Over 50 resources to dig up, farm, refine or manufacture as you build complex towns and cities.
- Classic city management gameplay meets modern technology in a sim tailored specifically for tablet / touch screen play.
- Developed by SomaSim, a new studio dedicated to producing deep simulation games for today’s players.