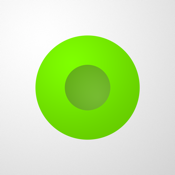 For the sake of simplicity the button for starting and stopping the recording is really really big. Like silly big. Why? A big button is easy to hit. It is so big that you can operate the app without looking.

Getting Things Done®
This app is for those times when you have an idea or thought that you cannot afford to lose. The app works well as the "ubiquitous capture tool" mentioned by David Allen, the man behind Gettings Things Done ®.

Evernote intergration
It is really easy to connect Record+Send to Evernote. By simply entering your personal Evernote email address, the app will send the sound files directly to Evernote. By using the "Custom content" field in the app, you can specify which existing notebook in Evernote to save the recordings in. Use @VoiceMemos to have Evernote put the recording in the VoiceMemos notebook automatically. Use the #-tag to add an existing Evernote tag.

DropBox intergration with IFTTT
To save the sound files in Dropbox use the amazing service IFTTT. Either create your own recipe, or use this one, made by one of our developers. IFTTT lets you do a whole range of things with files showing up in emails, in Dropbox and many many other channels.

Offline recording and background upload
When you record something while your device is offline, the app stores the files and uploads them later when the device has internet access. Also, you may trigger an upload of offline recordings by just opening the app, and let it work for 10-15 seconds.