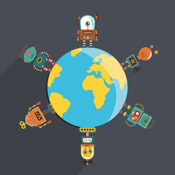 Evil robots have invaded earth, and it is up to you to save us all. Match all blocks of two or more robots of the same color to clear each level. Use power-ups to rid the screen of robots, and compete against your friends for the high score.

Robot Puzzle Attack provides an endless challenge in one simple game that you will enjoy again and again.

In the year 2048, a ridiculous evil robot sent his army to attack earth, fishing for our metal gear. Earthlings had become reckless and angry. Birds had become singing monsters. No one gave us a heads up! There were no super heroes. There was only injustice. The robot gods among us fell from the sky like white piano tiles. Boom. No one was safe, from the surfers at the beach to those who made a dash for the subway or a fun run for the temple. People were tapped out and looked like frozen dots next to the robot dragon. But you were pushed too far. Like your father the timberman, you had no brakes. The robots had crossed the line. While others stood still like plants or moved slowly about like zombies, you guided clans of humans to clash with the robots. Like a rare unicorn, you alone could lead your minions to retake the four kingdoms and establish a new empire. You were no fish out of water looking for dumb ways to die. You were an expert at modern war, ready to face your rivals, racing towards victory. While hiding in a mine, you were able to craft a sniper weapon that you could play like a magic piano, hitting weak slots in robot armor. The robots have begun to fall, one by one, two by two, and in threes. Now people everywhere marvel at your clear vision to set humanity free. Thus, begins an epic saga to crush the plague of 2048.