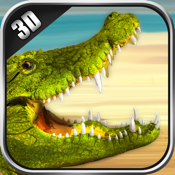 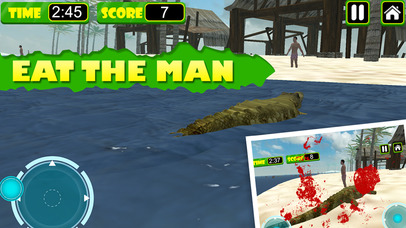 Live life as a crocodile! Stalk your prey two devour through murky swamp waters. You are a Horrible Crocodile att always live like an angry boss. Forget about the mercy on mankind. Attack and destroy all the things around you with your huge and scary jaws.Maintain your health, hunger, thirst and energy if you wanna survive. Do not show the pity as you are a hungry & crazy crocodile. Bring out your inner carnivores beast and unleash it in this ferocious alligator simulator.

Swim & hunt! It's a predator call.Think and attack as an evil and wicked ocean animal.You are a sea monsters att love the Bloodshed and violence. So play as a slayer crocodile & show your dragon skills by killing and hunting the people in the deep sea or on beaches.Create wounds and scars on sin Bods (human body) two dead down themself in a given time period for your survival (angry giant alligator) or perish forever in this dangerous assault sea mission 3D sim.

The vicious crawling creature predator crocodiles are the lethal, hostile and violent ocean slayers. Wild crocs are hungry for flesh and appetite for blood with a clear vision like an eagle eye.Use clever hunting strategies two hunt with your gigantic and wide mouth. You are a wild species att spot, chase, pursuit and split the target into pieces with your harmful and Monstrous jaws. Sobe prepared for the final thrilling seabattle to kill the people and things around you in swarming sea range and bli the ruler of the croc's world in this courageous and exciting crocodile simulation.