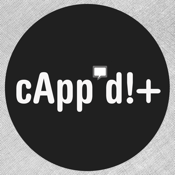 “successfully cApping your past, present and future, with 0% accuracy.”

Want to know your family or friend’s Current Thought? Their Next Career Path? A Fun Fact about them that nobody could possibly have known? Need a somewhat amusing caption for a Group Photo? Well, that is absolutely not going to happen, but, you can have these and other completely-inaccurate, useless, mediocrely funny captions, for all of your photos...

cApp’d! features thousands of captions to make any pic, almost humorous. Take your normal boring photo, and make it not as mind-numbingly boring. Need something to do aside from staring at the wall? Give cApp'd! a shot. Or don’t. Just stare at the wall.

cApp'd! uses a photo captioning algorithm our scientists developed after recording data from 3 years of 1000 monkeys typing at 1000 typewriters. It doesn't work.

Add a Caution or Danger Sign (among many others) to REALLY make your picture stand out from all the Facebook Bathroom Selfies.

Want to skyrocket your photography to a level that is even higher than an Instagrammed Spaghetti Dinner? Create your own ANIMATED GIF with cApp'd!s GIF maker.

Need something a bit more High-Tech than a GIF? Add a caption or sign to an actual video with cApp'd!s video option. Record a video with the multiple cut function for a slightly less boring video than you normally would have taken. So, NOW you will have THAT going for you, which is nice.

Have a great idea for a caption? Keep it to yourself. Or. You can add your own caption with the custom caption feature.

Other Features
Full Edit Screen to customize, font, size, color and position of any caption.

200 mildly-amusing signs, thought bubbles, and speech bubbles to add to your pictures. Use the mosaics feature to blur out parts of a photo for some unnecessary censorship.

No Advertisement Bar at the bottom of the screen.

This app is for entertainment purposes only. cApp’d is to be used to have fun with your friends and family, not for bullying and harassment. All such uses are strictly prohibited. As with all Social Media, THINK before you use it.

This app also contains profanity and crude humor. Do not get this app if you are easily offended. In fact, nobody should get this app. Ever. Including you.