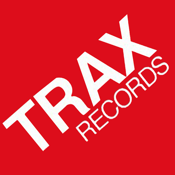 Trax Records began in 1984 as a vinyl pressing plant Musical Products in Chicago. Even at the beginning Trax was a major outlet for Chicago House DJs such as Marshall Jefferson, Frankie Knuckles, and Larry Heard. Trax paved the way for the new sound known as House and extended its recognition far beyond Chicago. Rachael Cain, also known as Screamin' Rachael has been a major driving force for the label and continues to expend its reaches.
Trax Records have gone through a number of changes over the years, and recently opened a new location in New Orleans. Trax continues to deliver legendary dance tracks and looks to expend on the genre by implementing the New Orleans’s one of a kind music style.

Without Trax, words like 'Jack', 'Acid', and 'House' would never have dropped into our cultural lexicon...Crucially, without Trax, the house revolution would not have been amplified. - ID Magazine, June 2004

Chicago's Trax Records is one of the most influential and important labels in the history of electronic dance music. They've been called the Motown of House, and it would be hard under any circumstances to dispute this statement. Trax wasn't the only label to produce house music back in the hazy Paleolithic era of the 1980s, but they were certainly among the very best. - Pop Matters

Carol Cooper on David Guetta's Album Nothing But The Beat: this season the only other dance album as worthy of your attention is the imminent Trax Records: The 25th Anniversary Collection. Arriving from Trax this October, the two-disc set contains the pioneering house productions that David Guetta and his peers heard at the beginning of their careers, then bent and twisted into their own images of dance music.

- Welcome to the Home of House Music
Screamin' Rachael, President