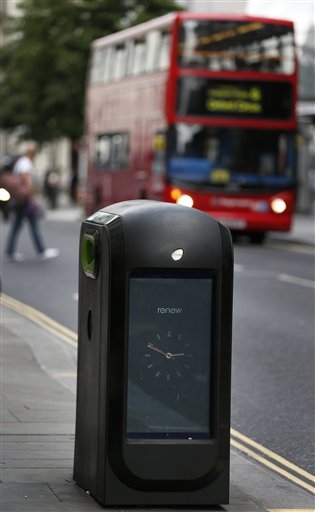 In London there are high-tech trash cans that feature LED screens to display various pieces of content to people walking past. It's usually an ad or the latest news/weather information and reception to them has been mostly positive. The trash cans are owned by a private ad agency firm called Renew, which also owns similar devices in Singapore and New York. A report has come out from the Guardian that the bins are grabbing 'MAC' information from peoples smart phones.

The company has talked about the idea of making the bins act as cookies - they could follow users as they passed bins by checking the MAC codes. This could be combined with signal strength to result in a system that could tell if customers were stopping at nearby shops and more.

These bins have permanent connections to a network that allows the company to stream new ads on demand to the service and give the latest news and weather in real time. It's a clever way of doing advertising, although this latest revelation has scared a few people.