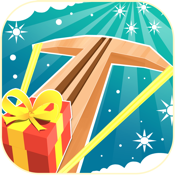 Holiday Sling Shot Deluxe is an iPhone and iPad game with a holiday theme. In it, you must launch the presents to the tree to light up the stars.

Launch the Presents to the Targets

The best snow and snowflakes apps for iPhone and iPad

It did take me a few tries to get the trajectory right. I don’t play Angry Birds or any of the other launching games, so it took me a bit to figure out how to shoot the cannon. Once I did though, the game got easier; that is, until I had to shoot presents between previously shot presents. Then, if you hit the previously shot presents with your currently shot present, you will knock off that present and any it hits on the way down. This is a great addition, because it makes you think harder about if you want to make a high arching shot, or a more straight fired shot. Whatever is going to work best to get around the other presents. 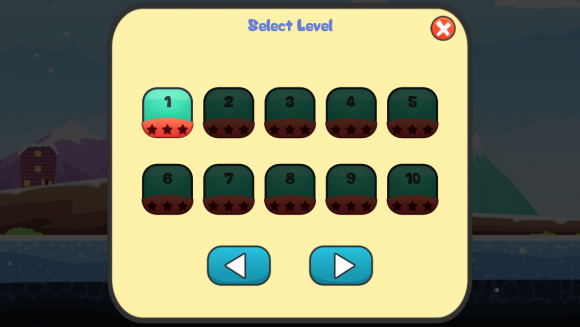 Difficulty Increases as the Levels Progress

As mentioned above, as the levels progress, the difficulty increases in Holiday Sling Shot Deluxe by requiring you to shoot presents into tighter and tighter spaces. The trees also increase so that you must shoot the present to the right spot on the right tree, and also get around the presents on which ever tree you are shooting the presents to.

The number of colors also increases to make the game more fun, and in some levels they even have the option of hitting one of several targets and you must select the most beneficial one rather than just hitting a target. For example, if you select the present closer to the cannon, it will be more difficult to hit the present at the back without knocking others off of the tree. 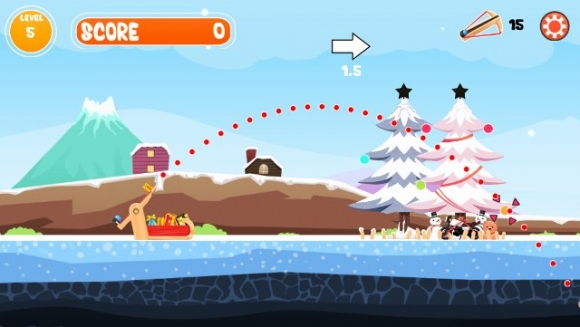 Shoot the preset to the tree 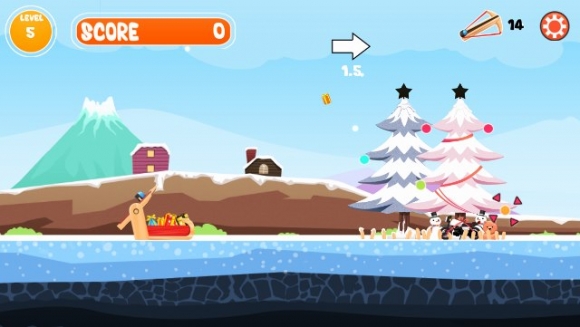 Holiday Sling Shot Deluxe is an iPhone and iPad game that is fun for kids to play while launching the presents to the tree. As the level increases you must improve your trajectory and figure out which present will be easiest to avoid in subsequent launches to avoid hitting the previous presents off of the tree. This makes the game more than just a shoot-and-play, as it involves forethought and strategy. Overall, it was fun to play and had nice bright colors. Kids will enjoy putting presents on the tree, and launching them from Santa’s sleigh.