There are some people who just seem to excel when it comes to trivia so why not make a little money as a pay-off for knowing all you do. The Quezztion Real Money Trivia app for your iPod touch, iPad, and iPhone gives players a chance to win actual prizes and cash in a really fun and challenging way.

The best sports trivia and quiz apps for iPhone and iPad

This is your chance to showcase just how well you do at trivia and not to worry you can practice as much and as often as you like before you head into an actual competition. This trivia app for money is featured in our list of the Best Trivia apps for iPhone and iPad.

So if you like playing quiz games itself and are not aiming for winning prizes or feel that you might need some practice, you can do it by playing for Z, the group trivia app virtual currency. When you’re ready to win real money, enter a cash competition in this trivia game app for money.

Practice and Then Test Your Skills

Are you ready for some good old fashioned trivia testing? Here’s an opportunity to show them what you’ve got with the Quezztion Real Money Trivia app that allows you to take as much time practicing as you want and then start to play for real prizes and even cash money.

When you're practicing you'll still be playing for money it's just called Z and is the virtual currency the app uses. When the time comes that you're ready to enter in a real competition you will be matched with another player whose skills match your own so it isn't unfair. You can build up your winnings or you can withdraw them as you play.

The game is a new release that is free to play in practice mode. You will need 174.3 MB of free memory space on your mobile device to download and install trivia app, iOS 10.0 or later on your iPhone, iPad, or iPod touch to play. 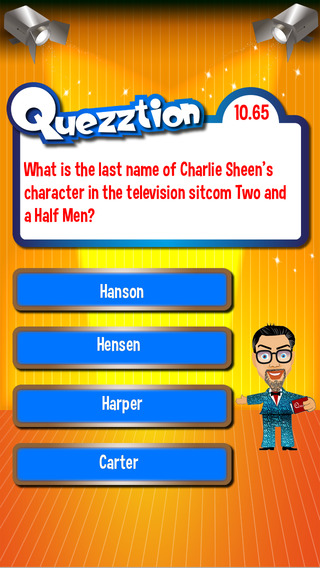 Playing the Game and Winning Big

It's all about having fun, showing off your knowledge, and winning big money with the Quezztion Real Money Trivia app. You can even get things started by inviting friends to join and then get a $10 cash deposit to your account each time one joins.

To make things more competitive and interesting there are also three different types of tournaments to play in. There are 10 in a row, King of Five, and Cash King of Five (play for real cash).

The game offers live player rankings, music that is upbeat and energizes you during gameplay, there is a rematch option, push notifications, and you can take advantage of integrated links with YouTube, Twitter, and Facebook. There is also the Ticketz Loyalty Program where you'll be able to earn Ticketz that can be saved up and then traded in for prizes. 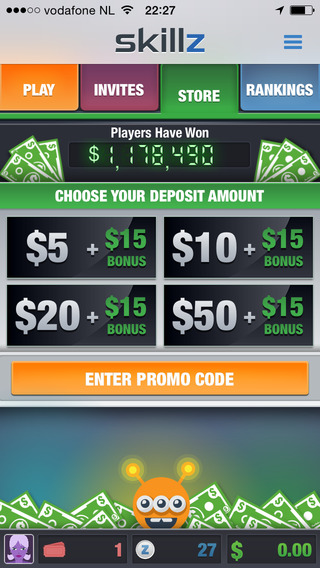 The Quezztion Real Money Trivia app for your iPod touch, iPad, and iPhone offers players a chance to test their luck at playing for real money in an engaging and challenging environment.