It’s always refreshing when a developer creates something that’s just a little bit different. There are lots of games in the App Store that borrow from the popularity of the Guitar Hero-style of play, but none of them are quite like Note Fighter. This is a fun little quirky app that doesn’t really fit neatly into this category. It does feature scrolling musical notes which is common in Guitar Hero knockoffs, but that’s where the similarities end.  This app is available for purchase from the App Store at a cost of $1.99 and it’s compatible with the iPhone, iPad, and iPod touch.

What makes Note Fighter a little different from other apps in the category is that as the notes move across the screen they include the real music note on the screen. Normally apps in this category use a color-based system: each note that moves across the screen is colored and the objective is to tap on the correct color as it approaches. By employing real musical notes the developers of Note Fighter have introduced an interesting twist to this style of game which gives it an educational aspect as well.

The best song discovery apps for the iPad

The only real problem with this app is the limited number of songs there are to choose from. There are only nine songs and they’re not exactly Top Ten, which does work against this one. The songs include are traditional songs like Jingle Bells or Auld Lang Syne so if these don’t interest you this app probably isn’t for you. What it lacks in choice it makes up for in the look and feel of the app. The attention to detail is quite good. You’ll need to make sure you have 68.5 MB of available space on your device for this one. 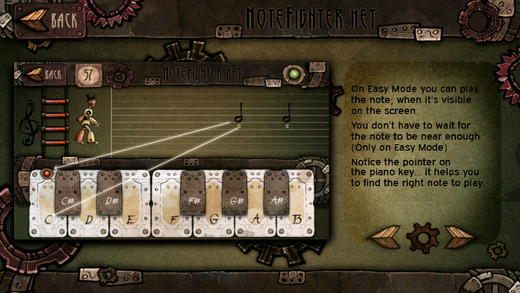 This is a pretty straightforward game to play. When you open the app you’ll see three buttons you can choose from: Play, How to Play, and Settings. The first two choices are just what you’d think they are and the settings option lets you toggle sound effects on or off and change the appearance of the screen. To begin play you just tap on play and then tap on one of the nine available songs. Once you do that the app will prompt you to choose a game level: easy, medium, or hard.

In easy mode you can tap on notes at any time as soon as they appear on the screen but not in either of the other two modes. In medium and hard modes you have to wait till the notes are almost at the end before you can tap on them. If you miss a note your fighter takes a hit - he’s a cool little robot character and when he takes a hit he makes a noise reminiscent of metal pieces clanging together. It’s these little details that make this app a little better than some of its competitors. You can only miss four notes or it’s Game Over and you’ll have to start from scratch. 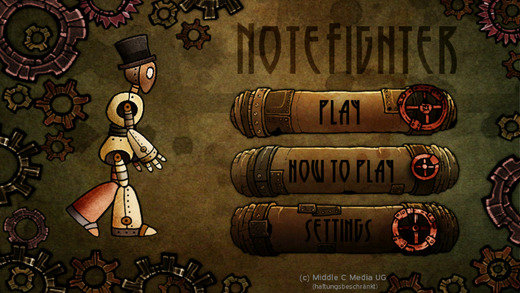 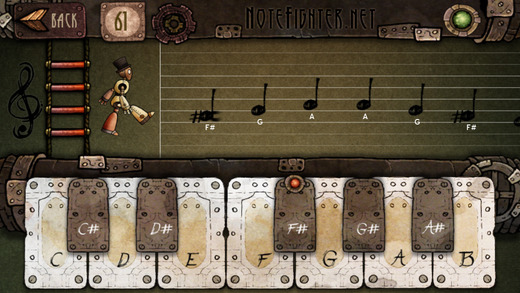 If you like music and you’re looking for something that’s just a little bit different then Note Fighter is a great choice. This fun little game includes some great graphics and sound effects and it’s highly addictive. The fact that the app uses real music notes is a great feature. The only real drawback is the limited song choices.